"Existentialists in shorts," creating meaning on the run 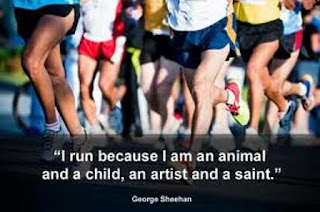 "Running wasn't just exercise or a hobby, or even necessarily competition, for them. Basically they were existentialists is shorts. I wanted to be one, too." -Scott Jurek, "Eat & Run."

Sometimes you create meaning with each step of a run. Sometimes with none. Mostly it's a happy medium.

I start out noticing every step. The impact on landing, the effort to move my legs. The first part of a run is an in-body experience. Everyday mind.

Each step moves further into consciousness. The body starts to fade into the background. The mind wanders. Wanders with the music. Wanders, thoughts flitting like birds out of mind. The breath is still there, and the movement. The body doesn't hurt, yet. I don't notice the miles or effort.

Then it comes back, the body. The breath reconnects, the legs are pumping, the arms, everything is in sync, connected, but different from when I started.

On long runs I can drift between these states--in body, out. On those, exhilaration can meet delirium.

I am running right behind some deep revelation, something life changing, if I can only run a little faster, reach out and catch it, grab it, tackle it.

But it's rarely about that revelation. I'm not generally fast enough to catch it. It's then that I get that it's the first step where we create meaning in a run, and every step after, not just some elusive magical step.

It's the knowledge that two, four, 10, 20, 50 miles are underfoot, logged by will, effort, discipline. I've put some order on one small part of the day, in my own way. I've seen things that no one sitting inside got to see. I've lived. I've reminded my mind-body-soul that we are free and mobile, sometimes. When we ask.

Labels: existentialism, George Sheehan, life and running, running and being, Scott Jurek, The 4-1-Run, why I run

Don't call it a comeback 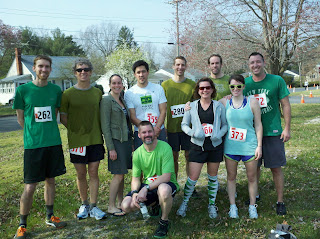 After a number of dormant months, a funny thing happened in the world of the Rise Up Runners: a mess of us ran a race. Old school style, the kind where everyone meets and carpools, runs their arses off and hangs out at, say, an Irish pub after. It's one of the reasons this group got together in the first place.

And despite a number of us having been on a bit of a running hiatus, folks ran pretty well at the Denton St. Patrick's Day 5K. You can check out the results here (including the ever speedy, not yet 40 Szwaja taking 2nd overall in 18:22). A number of RURs in the medals or damn near, as well as a number of new RUR affiliates and friends coming out to run and have fun.

We haven't met at "Da Corner" at 5am in some time. There haven't been many weekend group runs, aside from a nice turnout for a New Year's Day run around Easton. But when the RUR tribe gets together, it feels (to me) like we haven't missed a beat. Part of that is because of the friendships that the group has forged--a number of us enjoy hanging out whether or not we run. But here's hoping for more running and running-related adventures coming soon.

One of the next, most geographically common sensical places for our next trick would be the St. Michaels Running Festival on May 19. Take your pick of a half-marathon, 10K or 5K. 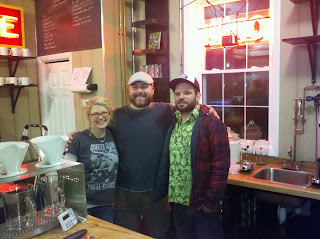 And equally big, or bigger, news from the World of Rise Up (WORU). Our namesake, Rise Up Coffee has opened Rise Up Coffee Roasters in Easton. There were quite a number of RURs in attendance for their grand opening this past Monday. They open early enough to run through for coffee. And I can foresee RUC's Easton joint being a meeting place and hang out for our band of boneheads. Be sure to get over and say hi to and congratulate Tim Cureton and the crew.

With all these recent goings-on and exciting news, I don't want you to get the wrong impression. This is nothing new. In fact, I wouldn't call it a comeback. If you think it is, you should just listen to LL Cool J...

Posted by Michael Valliant at 8:55 AM No comments:

Labels: Easton, local races, Rise Up Coffee, Rise Up Runners, why we run

Motivation; Used to do 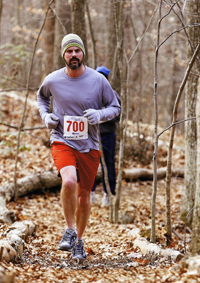 I used to run.

I used to be in shape. I used to seek out adventure or meet it head-long when it found me.

I used to play with the kids. I used to grab a longboard when Anna wanted to go for a bike ride. I used to kick the soccer ball, play tag or field hockey one-on-one in the back yard.

I used to have a couch without an ass-print on it. I used to not watch too many TV shows. I used to be mobile. I used to go mobile.

I used to connect towns with my feet. I used to run through the woods like a kid. My miles in the morning used to be a source of pride. I used to be proud. And humble. And not numb.

Those thoughts and others like them are what go through my head when I decide to make and keep a date with myself to run 7.5 miles on New Year's Day, 2011. A source of motivation to push myself, to fight against complacency. To seek and create my own discipline, to go after the feeling that comes with running and with finishing an hour run on a day when I don't have to run, but I want to.

It's not a long run or a memorable one, but it's a run. It helps me think about goals for myself, for running, for work, for life and what I am going to do to move closer to them.

Running connects me to the road, to the town, to the water, to the trees, to what I encounter on my run. It connects me to my mind, to my body, to my will, to my soul, over the course of an out and back route that I have run more times than I can count.

Running lets me start 2011 the way I want to. On my terms. It is a prayer. Of thanks. Of hope. Of looking forward. Of being present.

Labels: motivation, prayer, Used to do, why I run

Observations on a run, or, Landy may be chasing me

Sometimes on a clear, cold sunrise run, through trees and fields and along the water, you wake up parts of yourself you can't stir any other way. Not every time, but sometimes. Those parts can't be put into words.

I had some of those moments on a solo Sunday Daylight Savings 11-miler. Since those moments will remain wordless, you can have observations from the rest of the run. We'll work chronologically.

Text from Dominic this morning, who had been up all night with a puking child, likely out. Bieber stayed out til 8:40 p.m. and was another likely no-show.

Used my extra hour to drink coffee and read Charles Simic, who says "Everything you didn't understand/ Made you what you are."

I never understood those faucets that float unsuspended in place and yet water runs steadily out from thin air. So I'm a magic faucet. Which is nice.

The stars are bright on the first run I've grabbed a hat and gloves for this fall. It's brisk and I look forward to hitting mile 1 or so, where my legs will be more numb than cold. It's 5:34 a.m. (adjusted time).

I've been on enough runs that start in the dark and finish in the light where I'm the dork running in a reflective vest in broad daylight. Not today. I break bad. I run without reflection.

I run by Lando's house, where some lights are on and he talked about running a 20-miler this morning, so may cross paths later. Run by Lori's and Dominic's and "Da Corner" where we haven't met in a while.

I get to the YMCA and pull up to give folks a chance, in case, since Bieber would have to drive if he posted.

Nobody. But then it occurs to me that Landy knows the route we are running. He's become too fast and focused to run with us most of the time, but he's a social creature (maybe) and might challenge himself by giving "us" (which is now "me") a head start and running us down like Predator. Or to quote Joel, like "The Landimal."

I'm not ready to be prey, not yet, so I start up Oxford Road.

Crossing over Papermill Pond there is a heron standing in the water amongst a number of geese. I wonder how that conversation must go? Or maybe the geese are about to put a beat-down on him.

As I hit the trees around the Easton Club, there's a full-on owl discussion going on, calls and multiple replies.

Running along the trees on Oxford Road to Cooke's Hope, deer own the periphery, rustling and starting as I go by. Turning into Cooke's Hope, I look back along the road, marking time. After all, Landy may be chasing me.

As far as runs along/around town, the trails back there are money. Being able to turn off the road and dip down into the clear still of geese and light on the pond is sweet; surveying the cut fields, well, it's hard to be any more archetypal Eastern Shore.

Running on the back stretch, a doe is next to the trail and freezes like a three-year-old playing hide and seek, hiding in plain sight. I keep a steady pace and don't acknowledge her and she doesn't spook, we just pass.

I'd stay and visit, I want to explain, but Landy may be chasing me.

Startling a heron and watching them fly off, long legs hanging in tow is a surreal experience. It also makes dogs bark, if there is one nearby at the time.

Back onto Oxford Road, there is a runner up ahead of me, running in the same direction, opposite side of the road--running with traffic. Stride is all wrong for Lando, plus I can tell they are moving too slow, so I head out to catch and pass them. As I get closer a mane of long hair reveals itself.

I pass her around Waverly and offer a good morning and it is. She agrees in a smooth, soothing voice you could just listen to. She would kick ass as a books on tape narrator.

I'd love to stay and chat, I don't have time to let her know, but Landy may be chasing me.

Passing in front of the Y and the middle school, Bickford drives by and waves, probably wondering what kind of idiot runs in shorts in 35 degree weather. Then again, Bickford broke open the ice with a 2x10 in January so we could jump in. Bickford knows we're stupid.

Rails to Trails is my home stretch. A little over two miles to go and a place I like to pick it up. I generally turn my mind off and think about stride and pace. Long stretches of visibility and many side/crossing streets make it dangerous territory for a Landimal attack, but none comes today.

Either I have survived or there never was a pursuit (latter more likely). Has gotten me thinking about the Harrier Hash concept and what a perfect weekend fun run that would be for a group run. File it under things to hit the message board with.

Funny where the quiet, un-iPoded mind can wander over 11 or more miles.

I get home and the girls are not on adjusted time; they didn't fall back. Ava is quietly and feverishly coloring and Anna is playing her DS. Robin is still asleep. Breakfast and coffee to come.
Posted by Michael Valliant at 4:55 AM 3 comments: 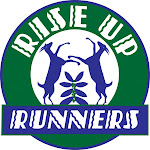